Fuentes Resources
(Scroll down, if necessary)

The Red Star (shipping) Line (RSL) operated from the beginning of 1873 through some time in 1934. During that time, about two million passengers left the line's main port of Antwerp, Belgium and other European ports for ports in the U.S. and Canada, about a quarter of whom were Jews. Sonia, her parents, and her brother boarded the line's S.S. Westernland II on April 20, 1934, and arrived in New York City on May 1,1934.

In September 2013, the RSL Museum was opened dedicated to the RSL and immigration. Sonia was the only surviving passenger of the RSL who attended the week's opening festivities.

On May 27, 2019, Lien Vloeberghs, a historical researcher for the RSL Museum, emailed Sonia in response to her inquiry, and told her she is one of two surviving passengers of RSL ships of whom the museum is aware. There are two other people who think they may have travelled on RSL ships as children from the U.S. to Europe, but the Belgian passenger lists of arrivals that could verify their claims are not in existence.

See The Jewish News of Sarasota-Manatee (Vol. 41, No. 2, Feb. 2011) for an article about the Pressman family and the RSL Museum.

On Aug. 6, 2011, Philip Heylen, then-Antwerp’s vice mayor for culture, tourism, and public worship gave a talk entitled “Antwerp to America: The Red Star Line and Jewish Immigrants,” which focused on Sonia's family, to Sonia’s congregation, the Congregation for Humanistic Judaism, in Sarasota, Fl. Sonia arranged for him to give this talk and introduced him to the congregation.

The Red Star Line Museum’s website is at http://www.redstarline.be/en. Read about Sonia and her family on that website.

The Red Star Line Museum is a member of the International Coalition of Sites of Conscience and is mentioned on its website at:  http://www.sitesofconscience.org/

As you know, your cooperation with the museum has been very important to us. In the first place, because yours and your family’s journey through Antwerp to a new and save life in the US, is a very interesting one that brings together many aspects of the wider RSL story of millions of other passengers. Your crossing in 1934 was one of the last on the proper RS Line, the story of your family is very well documented thanks to your brother’s diary, the police files we discovered with the help of Frank [Professor Frank Caestecker, University of Ghent] in Brussels, and the fact that you are still there to give that family history a personal and actual meaning. You and the remarkable things you have done would have never existed without all what happened between your brother’s decision to leave Nazi Germany for Antwerp, and your family’s arrival in the US.

For all these reasons, you became one of the ‘crown witnesses’ in our permanent exhibition. We are very grateful for this and hope to see you back soon!

Very best regards from a chilly and wet Antwerp! 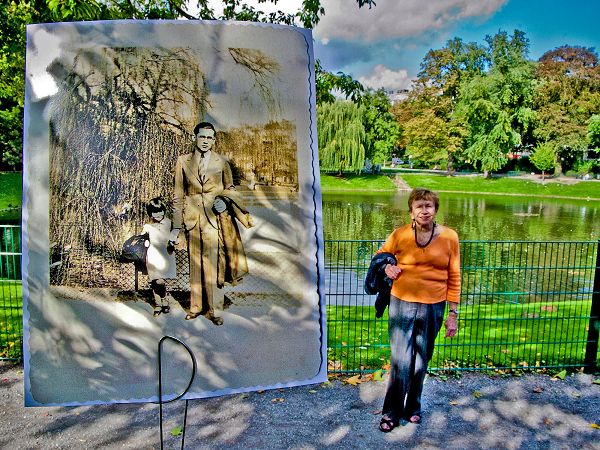 Picture of Sonia with her late brother, Hermann, taken in Antwerp’s City Park in 1933-34 juxtaposed with one of her at the same spot on September 13, 2011. 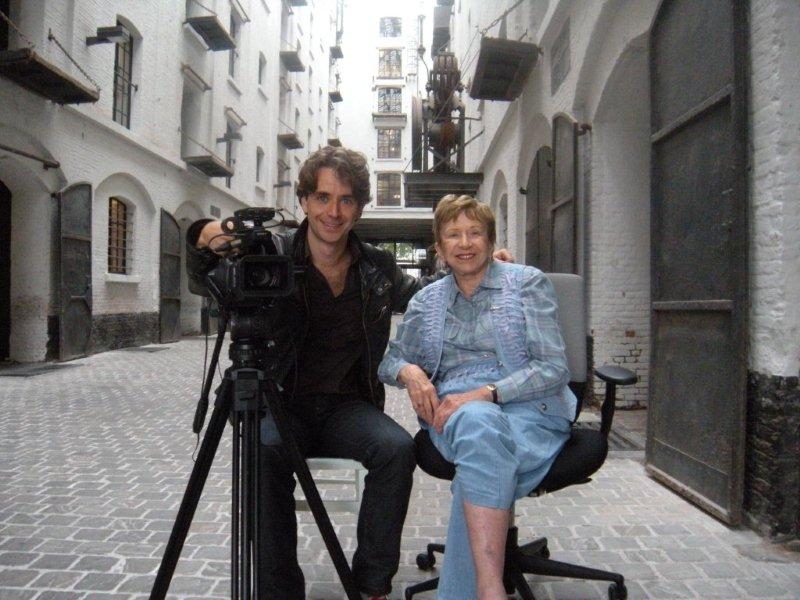 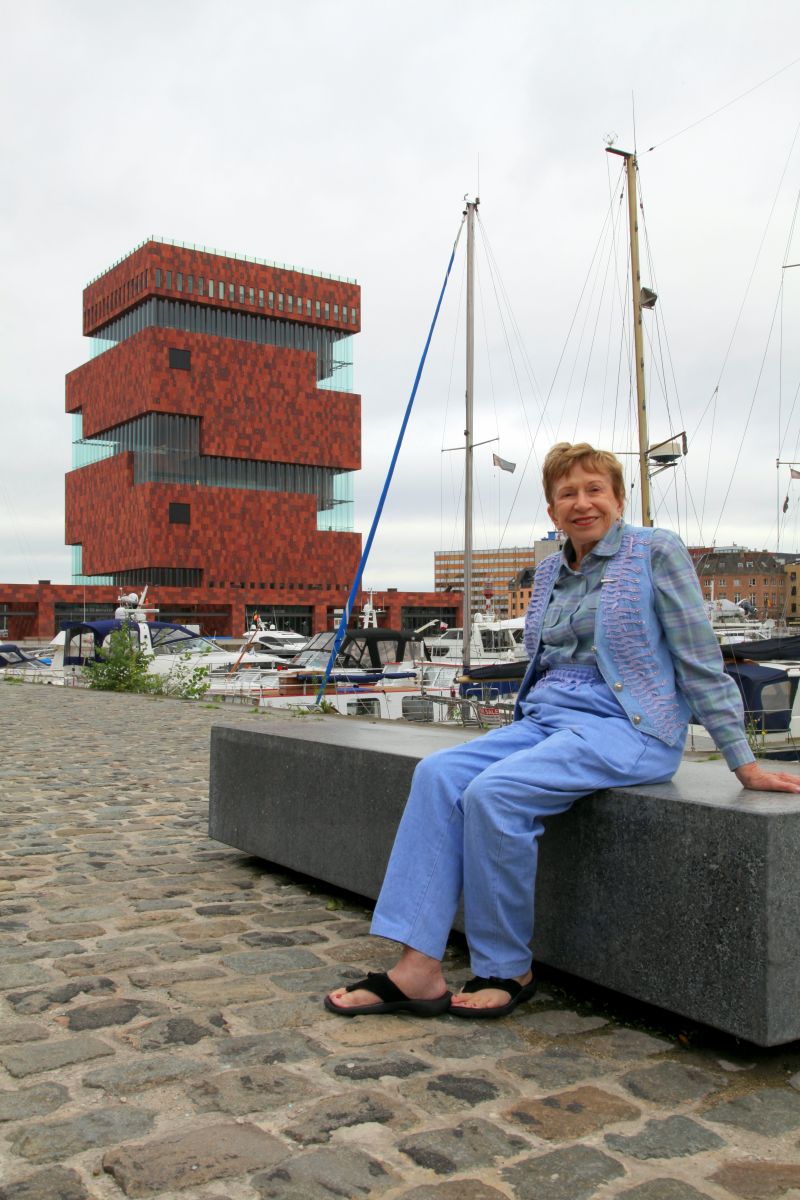 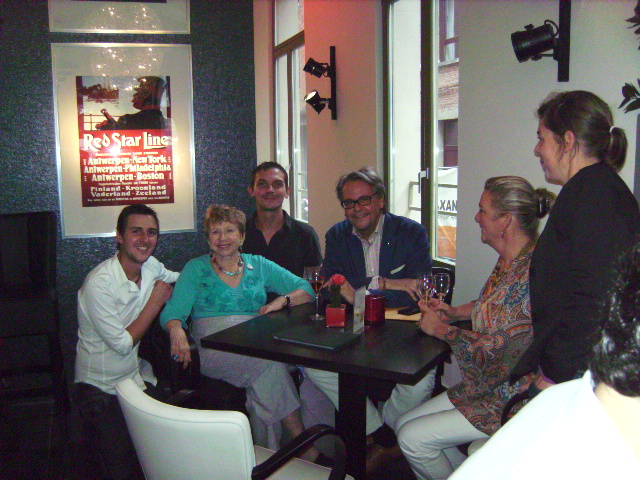 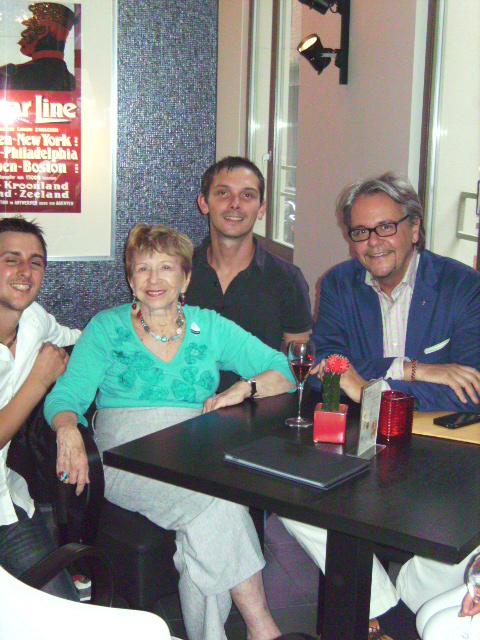 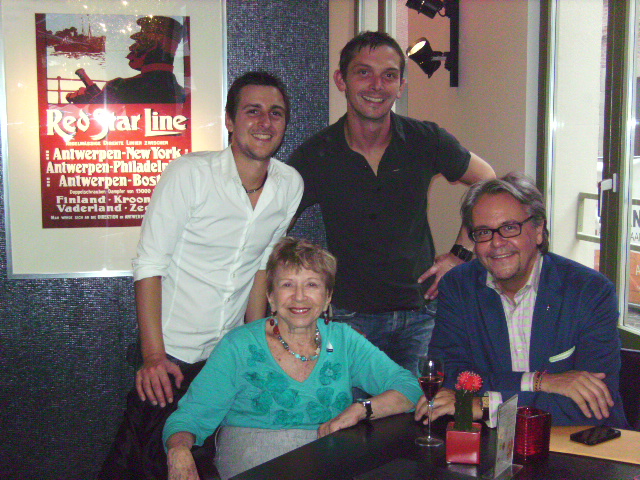 Sonia with Philip Heylen, vice mayor for culture and tourism for Antwerp, Belgium, at the inauguration of the Red Star Line Museum, September 27, 2013.

Sonia and Marcel (her driver) in front of the exhibit about her and her family at the Red Star Line Museum, week of Sept. 23, 2013.

Sonia in front of the exhibit about her and her family at the Red Star Line Museum.  In the background is a picture of Sonia as a child. Week of Sept. 23, 2013.

Picture taken Sat., Sept. 28, 2013, in Antwerp, Belgium in connection with the opening of the Red Star Line (RSL) Museum that day. From left to right are: Danielle (wife of Sonia’s driver, Marcel), Alisa (young woman Sonia met in Dresden, Germany in Sept. 2011 who came to be with her in Antwerp), Sonia, Mario (filmmaker retained by the Red Star Line Museum to make the film that is part of the exhibit on Sonia and her family at the RSL Museum), Mario’s daughter, Roxane, and Marcel.

Sonia and Mario De Munck in front of the exhibit about Sonia and her family at the Red Star Line Museum, week of Sept. 23, 2013.

Sonia in front of the exhibit about her and her family at the RSL Museum.

Sonia with Professor Herman Van Goethem, head of the Memorial, Museum and Documentation Centre on Holocaust and Human Rights in Mechelen, Belgium, September 26, 2013.

Sonia with Tim and Marie-Louise Ryback and their daughter, Audrey, at the Antwerp Hilton Hotel dining room, night of Sept. 23, 2013.

Sonia with Erwin Joos and his significant other, Nadine Trahé, in front of Sonia's condo, April 15, 2014. Erwin is the director of the Eugeen Van Mieghem Museum in Antwerp, Belgium. Erwin is holding Sonia’s memoir and Sonia is holding one of Erwin’s books. Van Mieghem (1875-1930) was an Antwerp painter who painted the immigrants boarding Red Star Line Museum ships for the U.S. and Canada. About a quarter of these immigrants were Jews.

Sonia with Erwin Joos, founder and curator of the Eugeen Van Mieghem Museum in Antwerp, Belgium, at her Sarasota, FL condo, April 6, 2015.

On May 15, 2015, Erwin started his presentation in Brussels, Belgium about the Eugeen Van Mieghem Museum by showing his picture with Sonia taken at her condo on April 6, 2015.

Sonia with Erwin Joos and Nadine Trahé, his significant other, at his power point presentation to an ORT chapter in Sarasota, FL at the Jewish Federation on April 7, 2015. Erwin is the founder and curator of the Eugeen Van Mieghem Museum in Antwerp, Belgium. Sonia introduced Erwin to Kim Sheintal, the ORT chapter’s president, which resulted in this presentation. (Jewish News of Sarasota-Manatee, July 15 issue, p. 7)

If you click anywhere in this paragraph, it will take you to the newsletter written in Dutch for June through August 2015 by Erwin Joos, founder and curator of the Eugeen Van Mieghem Museum in Antwerp, Belgium, to the members of the Eugeen Van Mieghem Foundation. The newsletter can't be enlarged by clicking on it, but it will enlarge so as to be more legible if you print it. In the second paragraph, Joos discusses Sonia and the Red Star Line.  If you scroll down in the newsletter, you can see the July 2015 article from the Jewish News of Sarasota-Manatee with a picture of Sonia, Erwin, and Nadine Trahé (his significant other).

Oct. 2, 2013, letter from W. Gregory Steube, member of the Florida House of Representatives for Sarasota, expressing his appreciation for Sonia’s and her family’s experiences in journeying from Antwerp, Belgium to the US.

This three-minute film was made by Mario De Munck for the Red Star Line (RSL) Museum and is part of the Museum’s exhibit about Sonia and her family.

Hover over the video to reveal the controls.

This film, shown on Polish TV, is in Polish, but the photos are worth seeing.